Tomsk Region: (Report #1) Four-centuries-old land of exiles
For outsiders, Siberia is most often associated with punishment and the GULAG, and the Tomsk Region is no exception, despite its stunning natural environment and the beautiful architecture of the capital, Tomsk.

With its 400-year history, the city of Tomsk in south-western Siberia is a major educational, science and innovation center. Nevertheless, the region’s past and the negative image of being the land of convicts and special settlers still affects its present.

There is a saying every Tomsk local knows: “God created paradise, while the Devil created Narym.” Narym is located in the southern part of the Tomsk region – difficult to get to, and right smack in the middle of a swamp, cut off from the rest of the world. It's a place renowned as a destination for exiles, dating back to the Tsarist regime. (Play video for more.) 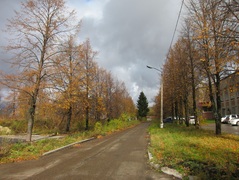 The city of Tomsk in western Siberia has earned itself the title of Russia's major education and IT hub, and one of the country's fastest-developing innovation-based centers.

Some of the region’s main industries are machine building, metal working and timber – but as important are nuclear research and production. However, now investment is flowing into new and growing industries that include technological innovations, scientific research and development.

Tomsk is one of the oldest cities in Siberia, but it was only officially opened to foreigners in 1990.

Today, wooden houses which are hundreds of years old still line the streets. These are contrasted by the youthful enthusiasm of students who flock to Tomsk, the home of Siberia's first university. (Play video for more.) 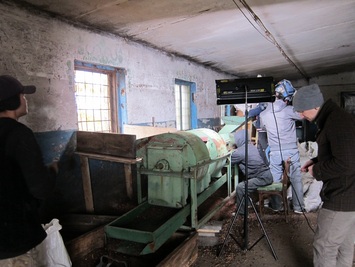 Tomsk Region (Report #3): Exploring the region's vast natural beauty
The local economy in the Tomsk region in western Siberia has been linked with oil and gas for quite some time, but it has a new growing and developing sector – the forest. It involves the gathering and the processing of wild growing natural products such as berries, mushrooms and pine nuts.

“One of our forests' excellent products is pine cones. They are very good for one’s health and people enjoy collecting them in a forest. Families come with children. Young people do it a lot too, especially now that there is a shortage of jobs in the area. You can collect for your own consumption or you can sell them at a good price. There are people who live off this business,” Vasily Titov from administration of Tomsk region told RT.

It is estimated that picking and processing of wild-growing stuff provides earnings for about 100,000 to 150,000 local inhabitants. Those who gather pine cones can sell them to companies for processing.Cones are gathered at special stations where people bring them. The companies also have teams that gather these cones. "In terms of revenue, we can even be compared to the oil industry. There is huge potential here which needs to be realized,” Andrey Lapay, director of the local cedar plant, said. 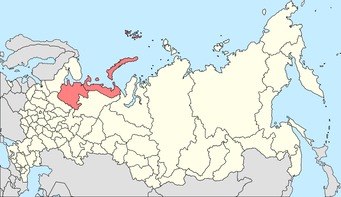 Arkhangelsk Region: (Report #1) From ships to diamonds
Once the country's only sea port, now Arkhangelsk is recognized as the capital of northern Russia with a budding industry and a great historical past.

Arkhangelsk has a coastline of three Arctic seas, and because of its location it was extremely important in the 17th century as Russia’s first and only seaport, as well as its first sea route to the West. The region became extremely wealthy because of the sea trade and monasteries, which were very much involved in the business of trading salt and woods. The first Arctic expeditions were also outfitted and seen off here.

However, Arkhangelsk wasn't always known as the “Gateway to the Arctic”. In the 1920s it was called the “national hard-currency shop” as its rich timber and paper-pulp industries yielded the lion’s share of the Treasury's hard-currency earnings.

The twenties were a controversial part of Arkhangelsk’s past, mainly due to the fact that its industries flourished thanks to tens of thousands of prison inmates forced to work in the north during Stalin's time. Yet Arkhangelsk did make a more positive and lasting mark in history when Peter the Great founded Russia's first shipyard there and it became the heartland of the country's fleet. (Play video for more.) 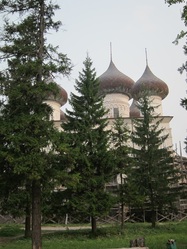 Arkhangelsk Region: (Report #2) Kargopol - home of clay toys and monument to medieval architecture
The small town of Kargopol, known as an important trade center in the XVI century, is located a thousand kilometers north of Moscow. Now its ancient arts and medieval architecture are the things that keep the town alive.

Frozen in time, Kargopol is older than Moscow as its history dates back as far as the eleventh century. Its stone churches and centuries-old wooden houses once owned by rich merchants stir the imagination. Once, Kargopol was one of the wealthiest towns in Russia thanks to bustling trade by the Onega River.

But Kargopol began to fade into obscurity when sea trade was moved to St. Petersburg and, later on, when railroads were built that bypassed the town. (Play video for more.) 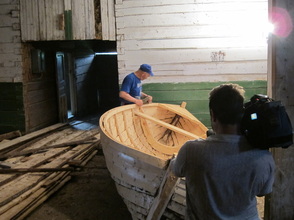 Arkhangelsk Region: (Report #3) Northern Pomors -- living off the sea
A thousand kilometers north of Moscow on the White Sea coast lies an ancient land belonging to a sea-conquering people – the Pomors.

Sailors, fishermen, ship builders – the Pomor people have been linked with the sea for generations, and even today their way of life has not changed much.

“My grandfather used to build one-mast and two-mast boats. He was one of the best ship builders out there. Everyone in my family is connected to the sea. They were either sailors or captains,” says Arctic Sea captain German Burkov.

Burkov is a native of Patrekeevaka Island, one that he calls the Homeland of Captains. The island is only accessible during the summer months, and it takes a four-hour boat journey to get there. Today, it is inhabited by about 400 Pomors, who are the descendants of the island's very first settlers.
(Play video for more.)